I met Lillian Rozin when we were both working in Harvard Square. I think she may have attended one of the open mics that the Cambridge Center for Adult Education (where I was working as a part-time events manager and then as full-time PR director).

Our first show grew out of a set of songs about water that we had performed at the Cambridge River Festival. Here’s how Beverly Creasey described it in the New England Entertainment Digest.

"The thrill of attending cabaret comes from the almost operatic range of emotions in one short evening — one song can make you weep, the next can send shivers of recognition up and down your spine.  Opera does that with a vengeance (literally and figuratively), but cabaret can do it on a smaller scale… without the spectacle.

Unless you’re Will McMillan and Lillian Rozin.

The Will And Lil Show could give Cecil B. DeMille a run for his money.

Lillian and Will actually get wet when they do their show about water.

Lil sings about washing that man right out of her hair while Will perches cloud-like above her with a watering can.  Needless to say, the audience showers them with affection for their ingenuity…and their lunacy.

Their shenanigans include a romp in a tiny wading pool (in order to offer up the Bobby Darin novelty ‘Splish Splash’), and just when you’ve giggled yourself into oxygen deprivation, they grab your heart and rip it inside out with Jacques Brel’s ‘The Port of Amsterdam’ or Andy Barnes’ exquisite lamentation, ‘The Last of the Great Whales.’”

Our next show was about food — which was somewhat of a no-brainer because Lillian is a terrific cook AND both of her parents have studied and/or written about food and cooking.  Lillian had also previously performed songs about food with her brother Seth Rozin, the founder and producing artistic director of InterAct Theatre Company in Philadelphia, PA.

So we built upon that foundation to create We Are What We Eat — A Potluck Cabaret.  Here's what Beverly Creasey, this time writing for Bay Windows, said about our food show.

“If you thought Will and Lil’s ‘WATER’ show made a splash, then their ‘FOOD’ show will have you begging for seconds.

Will McMillan and Lillian Rozin cook up a light and fluffy theatrical souffle of scenes, stories, songs and oddities, all centering on ‘food, glorious food,’ as they say in the musical Oliver.  Aside from the grand notion of gathering all (well, a lot) of the songs written about comestibles, Will and Lil bake, borrow and steal delicious bits from the theater (like the Wolf from Sondheim’s Into The Woods serenading his next meal) as well as from traditional cabaret (like Cole Porter’s frisky tale of the oyster who went down and came right up again).

From social climbing bivalves to the biting satire of Sondheim’s ‘The Ladies Who Lunch,’ Will and Lil serve up treats to ingest as well as digest.  Will stuffs celery and passes it around, and Lil makes popcorn while singing Stephen Schwartz’s ode to waitressing ‘It’s An Art.’  Not a kernel was un-popped.

Both performers are master comedians who can deliver a serious song, like Will’s touching version of ‘Feed the Birds’ with heart wrenching sincerity.

Lil has a vocal range most singers would kill for.  She can ride a wild blues parody like the sexy ‘I Can Cook, Too,’ then soar to baby-voiced heights in ‘Peel Me A Grape,’ and top it all off with an operatic roulade — or perhaps it was a remoulade.

Will, too, is a wonderful deadpan, not to be rivalled in their sensational version of ‘Have an Eggroll, Mr. Goldstone’ from Gypsy.  Lil ties Will to a chair, tormenting him with juicy morsels of food.  Not even Blue Man Group can match what Will & Lil do with a banana.  And you can just imagine what they do with the stately Gilbert and Sullivan banquet song from The Sorcerer about strawberry jam and rollicking buns.

The audience gets to watch, and eat, and play an edible ‘Name That Tune’ game complete with prizes, both tasteless and yummy.  Even their fabulous accompanist, Mark Shilansky, is inspired to leave the safety of his Steinway grand and join in on ‘Life Is Just A Bowl Of Cherries.’

After the musical feast, the audience is invited to an actual repast with goodies enough for a Queen’s ransom — and to satisfy the heart as well as the stomach, Will and Lil are donating a portion of the box office to the Cambridge Food Bank.

If you leave the Cambridge Center with a tummy ache, it’s from laughing nonstop.”

We. were fortunate to record a rehearsal of our food show with the wonderful pianist Doug Hammer at his studio north of Boston.  During the COVID-19 shutdown, he and I worked via Zoom to edit and mix six of the songs from We Are What We Eat — A Potluck Cabaret which are available in the player below for your listening pleasure.

You are also welcome to read a blog post I wrote about collaborating with Lillian by clicking here. 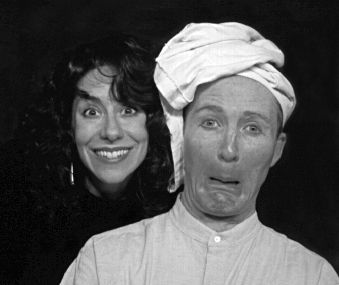